Originally formed at East Jefferson High School in Metairie, La. , with their first practice in a garage on September 28th, 1972, T.Q. & The Topcats were a 50's and early 60's show band. The group performed all of the classic songs of the pre-Beatles era of rock and roll. Every song the band did was performed with outrageous choreography or some type of skit with costumes, smoke and special lighting. They also did tributes to Elvis Presley, Little Richard and Buddy Holly. Everyone in the band sang and did choreography and everyone had a nickname to put across the feeling of a hoodlum gang of the 1950's. 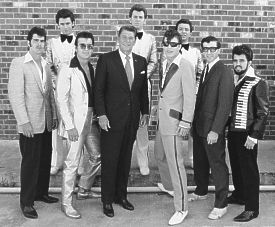 The original band consisted of STEVE MONISTERE, alias "Smiley Bafoon Walker", on bass and vocals, JEFF HICKS, alias "Belch A. Rooney", on drums and vocals, CHARLIE CUCCIA, alias "Jake the Snake", on guitar and vocals, GINO PEREZ, alias "Keys", on piano and vocals, CRAIG TOLSON, alias "T.Q.", on lead vocals, GLENN CASPER, alias "Angel Shark", on lead vocals, SAL CANDILORA, alias "Kookie Kookarelli", on lead vocals, and Dennis Zambon, alias "Moose Mongo", on sax and vocals.
This early formation of the band performed mainly around New Orleans and the southeast portion of Louisiana. In August of 1976 Candilora left the group and was replaced by PAT CAMPBELL, alias "Choo Choo Cabooski", on guitar, bass, and lead vocals.
The group began to travel a little more and in September of '76 had the privilege to perform for and meet future President Ronald Reagan. In March of '77 Perez left the group and was replaced by JERRY NUCCIO, alias "Buddy Love", on piano and vocals.

At this point T.Q. & the Topcats started traveling all over the southeast portion of the United States. For the next three years the band would play to packed houses in showcase clubs in all the major cities of the south. The band also spent several weeks in Las Vegas and Los Angeles. While in L.A., The Topcats had the once in a lifetime opportunity to play "Stump the Band" on the "Tonight Show starring Johnny Carson". Once while in Starksville Mississippi, the band was thrilled when Billy Joel was in the audience and agreed to come on stage to play a few of his favorite oldies. Jerry Lee Lewis also sat in with the band in Memphis, Tennessee. Also briefly in and out of the band during this period were JIMMY BORDELON, alias "Turkey", on sax and vocals, and "Rocky Tattoo" on sax and vocals.
By September of '79 Zambon and Tolson had left the group. The remaining members carried on, dropped "T.Q." from the name and move into a new wave/original sound. The members dropped their nicknames and added BUZZY "BEANO" LANGFORD on guitar and vocals. 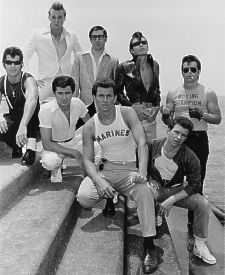 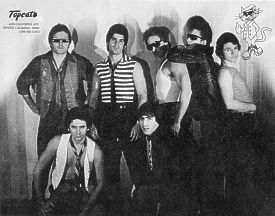 After just a few months in this new direction Hicks and Cuccia left the band in early 1980, and the remaining members decided to go back to doing what they were best known for - 50's & 60's music. The Topcats then consisted of Steve Monistere on bass and vocal, Glenn Casper on sax and vocals, Pat Campbell on guitar, bass, and vocals, Buzzy Beano on guitar and vocals, KENNY BRANDT on lead vocals, STEVE ACCARDO on keyboards, and Gary Bascel on drums.
The band continued to travel mostly along the gulf coast doing a 50's & 60's show. Early in 1981, Bascel and Brandt left and were replaced by PAUL GARAUDY on drums and Sal Candilora on lead vocals - he's back!
The Topcats then moved into a classic rock sound and started doing a few original songs. In March of '81 "Billboard" magazine wrote an article about the Louisiana music scene and The Topcats are mentioned as one of the hottest acts to "keep an eye on". 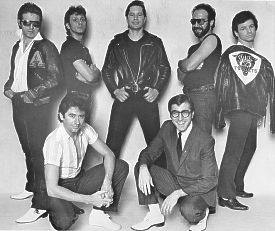 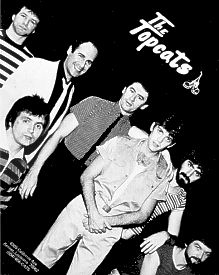 Campbell switched to bass and vocals permanently. Garaudy and Hirstius are replaced respectively by ROBERT SCHULTE on drums and vocals, and Sal Candilora on lead vocals - he's back again!!
At this point The Topcats started doing a theatrical rock show. Using smoke, explosions, special lighting and costumes the band performed shows to songs such as David Bowie's "Space Oddity", Procal Harum's "A Salty Dog" and a tribute to Vietnam veterans which includes "The End" by The Doors , "Goodnight Saigon" by Billy Joel and "Born In the U.S.A." by Bruce Spingsteen.
The band then consisted of Pat Campbell on bass and vocals, Buzzy Beano on guitar and vocals, David Gamble on keyboards, Sal Candilora on vocals, and Rob Schulte on drums and vocals. The group still traveled quite a bit and for most of 1984 was based out of Houston spending most of it's time performing in the major cities of Texas. One of the band's favorite memories from this period was the time The Topcats performed as Bo Diddley's back-up band at a concert in downtown San Antonio, TX. It was during this period the band also started writing and recording their self titled debut cassette.

Released in 1984, "The Topcat EP" contained four original songs that the band wrote and produced themselves. Also around this time The Topcats sang the background lyrics, "who dat talkin' 'bout beatin' dem Saints" on Aaron Neville's version of "When the Saints Go Marchin' In".
In late 84 Candilora left the band for the final time and was briefly replaced with DON BERRY on vocals and harmonica. By the middle of '85 Berry was gone, leaving the four members who remain in The Topcats today.
No longer doing "show sets" the band from this point on is known as a "party band", although they still do several originals. Realizing the camaraderie and the professionalism of the four members who (by 1989) had been together longer than any other version of the band, The Topcats released their first full length "LP". "Fourplay" is an album of all original songs written and produced by the group and is released with much acclaim in the local press. 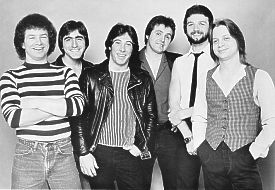 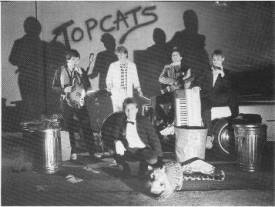 Over the next few years the group was fortunate to be able to stay close to home doing very little traveling. Playing mostly "one nighters" in southern Louisiana and Mississippi. The band was quickly gaining the reputation as the best "party band" in the south. In 1993 the four members, who came together in 1983, celebrated their ten year anniversary with the release of a new "EP" entitled "Ten Times Around the Sun" which again was written and produced by the band.
The Topcats were voted "Best Cover Band", for 1996, 1997, 1998, and 1999, in Offbeat Magazine's "Best of The Beat" awards! That's four years in a row! In early 1998 The Topcats celebrated their fifteen year anniversary with the release of their first recording on CD, "Party With the Big Dogs" which contains several cover songs as well as four new originals and was selected as "Cover Album of the Year", for 1998, in Offbeat Magazine's "Best of The Beat" awards.

In the year 2000, the Topcats released a Christmas CD called "We Wish You A Merry Christmas." Then in 2001 the group released another Christmas CD entitled "We Wish You A Merry Christmas, Again." The summer of 2002 brought yet another compact disc release. "Welcome To The Big Top" was a full length CD with more covers and a few originals. For Christmas 2002, the Topcats contributed to a compilation disc called "Holiday Angels Working Undercover." Several New Orleans cover bands recorded Christmas songs to benefit Angels Place, a charity organization for terminally ill children. In April of 2003, the Cats released "The Topcats 1983 - 2003" and "The Topcats 1983 - 2003 DVD", an aural and visual account of the band's first twenty years. At the same time, "Fourplay", the band's 1988 recording was released on CD, along with four bonus tracks! In March of 2008, the Topcats released "Twenty-Five", a CD with sixteen tracks recorded at the Apartment Studio in celebration of their twenty-fifth year together! On May 17, 2013 they released "Live at Lundi Gras", a recording of The Topcats at the Lundi Gras Celebration in February of 2013 and in commemoration of their thirty years together!
The Topcats now celebrate 39 years together gaining a larger fan base daily........